Enjoy the sounds of shinobue and guitar, like the Sado breeze. We will be performing original songs as well as classic and contemporary songs from around the world, and exciting percussion solos. Yasukazu Kanou was a member of KODO from 1987~1998. After he launched his solo shinobue career, he continued to live in Sado, and made his debut in 2005. He has released numerous CDs and collections of musical scores. He has performed around the world in over 30 countries through more than 2000 performances, in addition to shinobue classes and workshops he has given around Japan and the world in order to promote and preserve the fue and matsuri festival traditions. Takafumi Imaizumi joined the KODO Apprentice program in 1998. He is the 2004 winner in the Solo category at the Famous Ukulele Contest. 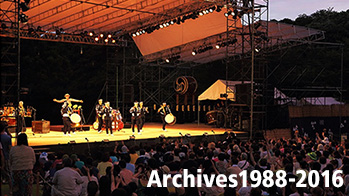