There are Island songs of the Amami Islands that have been long protected in different villages in different regions. Born from the daily lives of the islanders, the hearts and intentions of those songs are delivered through the lavish cast of Chitose Hajime, Anna Sato, and Arisu Sato. Come join this dream-filled evening to catch the conversation between the Islands of Sado and Amami.

Originally from Amami Oshima in Kagoshima, she made her debut in 2002 with Wadatsumi no Ki. As a vocalist, she has showcased her unique vocal sound and stage presence on countless stages. February 6 2012 marked her 10 years of her singing career, for which she released a best-of album titled Kataritsugu Koto. In July of 2015, to mark 70 years since World War II, she released the new album Heiwa Gannen. The concept for this album was “to never forget, and to never repeat,” urging a renewed commitment to thinking about peace. This album received the 57th Japan Record Grand Prize for Good Planning. In 2018 her new song “Anata no Yume de Mezameta Asani” (On the Morning I Woke to Your Dream) was used for a commercial for Chofu Seisakusho Co. and garnered attention. As one of the representative female singers from Japan, Hajime is based in Amami Oshima and her activities extend far beyond.

Hailing from Amami Oshima, Sato learned island songs from her grandfather since she was three years old and later won many awards at island song tournaments. In 2005, she was part of Love/Earth Expo produced by Kansai Yamamoto and made her major debut with Koishi, Koishiya. In 2013 and 2015, she performed the role of Fantine in the musical Les Misérables. In 2015, she released her self-produced CD Tsumugiuta. Holding the island songs of her home close, she performed a live concert of her island songs in New York in May 2016, and in September, performed in Rencontres de Chants Polyphoniques, a song festival on the island of Corsica off of France, where she rivaled many other singers hailing from Corsica, Italy, and other Northern European countries. In October of the same year, she performed an arrangement of her Amami island songs (with vocals and shamisen) for the contemporary dance production of ICON by Belgian choreographer Sidi Larbi Cherkaoui at Sweden’s The Göteborg Opera. This piece continues to tour the world. In 2018, she will be performing with Eva Yerbabuena, the famed flamenco artist. He music of her small island has connected with the rest of the world and her activities have spread worldwide. In 2018 she sang the man theme song for the Taiga Drama TV show Segodon, and also appeared in the series as an islander gifted with song.

Hailing from Amami Oshima, she is currently 24 years old and began learning island songs at the age of four, influenced by her older brother. In 2004 she won the Newcomer’s Award at the Amami Folksong Contest, and in middle school she won the top award for three years in a row at the Amami Folksong and Folkdance Youth Tournament. In 2010, when she was in her junior year of high school, she was awarded the grand prize at the Amami Folksong Competition. This was a record-breaking feat for the youngest performer to win the award since Chitose Hajime won in 1996. She released her self-titled album Arisu in March, 2012. 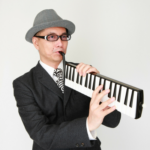 He was born in Kumamoto in 1957 and raised in Osaka. Keyboard, guitar, accordion, mandolin, lyrics, composition, arrangement, Dr.KyOn is a multi-musician and producer, with a university degree from Kyoto University. Active in Kyoto until the mid-1980s, from 1987 to 1995 he was a member of BO GUMBOS while supporting other artists.
In recent years, he has supported a wide range of artists of all genres and generations including Chitose Hajime. He also is a member of an instrumental unit called ”Darjeeling” together with guitarist Yoshiyuki Sahashi.