The first evening’s concert will feature the entire Kodo group, from its youngest performers to its veterans. For the second and third night’s concerts Kodo has invited two groups of guest artists. The first guest, “BLUE TOKYO,” is a group of highly trained rhythmic gymnasts who bring refined artistic qualities to their performance. The second guest, “DAZZLE,” has captured a great deal of international attention for its creative dance style. By collaborating with the powerful dancers from these two groups Kodo hopes to bring a new flavor of performing arts to the Shiroyama Concerts. 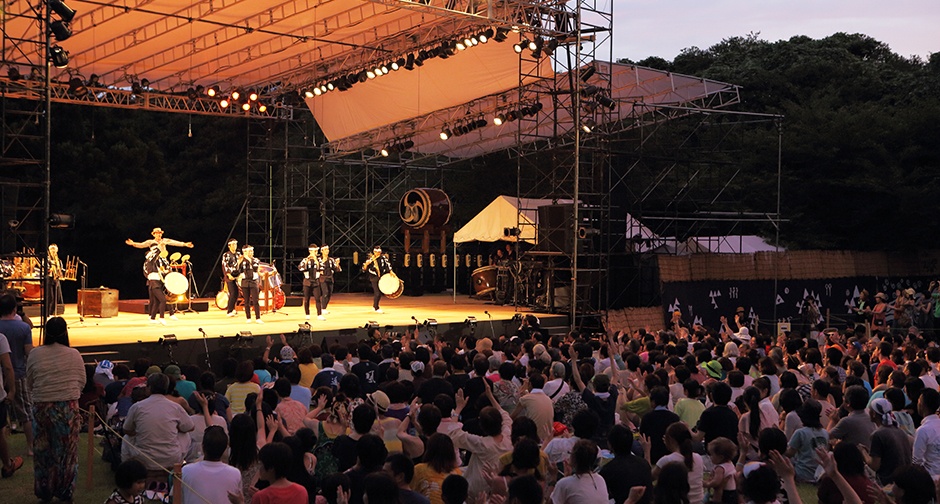 Every year many people sail across the Japan Sea to Sado Island and attend the Earth Celebration. This year on the opening night we celebrate the Ocean, the cradle of life and the source of the blessings of nature. All the Kodo players will be on stage. Let’s send the sound of fanfare and jubilation out across the ocean!

“BLUE TOKYO” – The polished and honed bodies of rhythmic gymnasts. The powerful taiko performance of Kodo. On the second night we present “Earth”. Together the dancers and drummers will become the power of the human form, expressing the roots of being, dancing and beating drums with the mother nature. Sit back and enjoy.

Kodo’s goal is One Earth. It’s a world where diverse cultures and lifestyles can interact and live together. On the last day of Earth Celebration we invite two unique and original dance groups “DAZZLE” and “BLUE TOKYO” to join us. Their collaboration with Kodo will break the limits of artistic genres and bring you a night of celebration. Once a year at the Earth Celebration let’s be one with the world and rejoice! 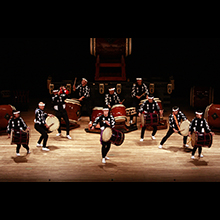 Exploring the limitless possibilities of the traditional Japanese drum, the taiko, Kodo are forging new directions for a vibrant living art-form. The taiko is something you experience viscerally as the sound of the drum travels from the player and reverberates in the body of the listener. Since the group’s debut at the Berlin Festival in 1981, Kodo’s ongoing “One Earth Tour” has brought the experience of the taiko to 46 countries around the world for over 3,700 total performances. Spending about a third of the year overseas, a third touring in Japan and a third resting and preparing new material on Sado Island, Kodo strives to both preserve and reinterpret traditional Japanese performing arts as they develop new styles that transcend all genres and borders. Since 1988, Kodo has had the pleasure of inviting artists they have met in their travels back to their home of Sado Island to engage in unprecedented musical collaborations at their annual music festival “Earth Celebration.” 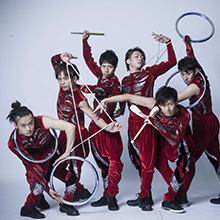 BLUE TOKYO is a professional male rhythmic sportive gymnastics and dance ensemble founded in 2010. They embody the evolution of athlete to artist. The group combines their well-trained bodies with art and creates fresh and unique body expression. They have performed with ayumi hamasaki, Daichi Miura, Lead, Hiromi Go, Shoko Nakagawa, and AKB48. Furthermore the group took part in the “Michael Jackson: The Immortal World Tour” production of Cirque du Soleil and is widening the theatrical field for professional male rhythmic gymnasts.

DAZZLE is a dance company that creates dance productions with a wealth of originality. Their motto is “undefinable dazzle of belonging in every category while not falling under any category”. They have reconstructed every style, fused street dance and contemporary dance and created a unique and original dance style. Their most important work, “Misty Mansion,” won the grand prix at the “Green Festa” theatre festival and received an award of excellence at Young Director Concours. It was well received at the SAMJOKO Asia Performing Arts Festival (2010, Korea), the Sibiu International Theatre Festival (2011, Romania), and the Fajir International Theater Festival (2012, Iran).