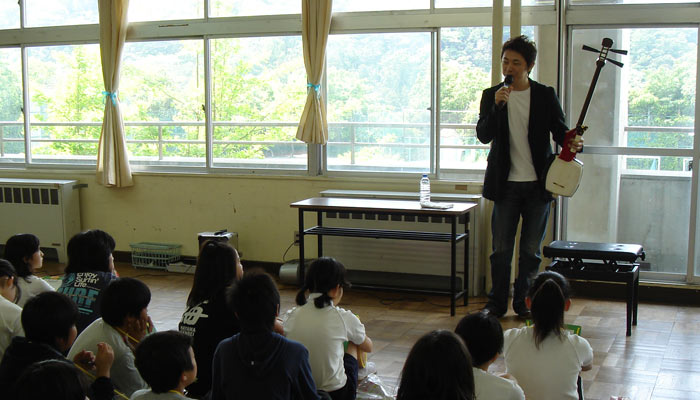 Experience an up-close talk and performance by this year’s Shiroyama Concert guest artist, shamisen player Hiromitsu Agatsuma. Using tradition as a base, Agatsuma has carved out new possibilities with the shamisen and he will talk about the history and structure of the instrument, the background of Japanese folk songs, and his activities and episodes from performing in Japan and abroad. There will also be a live performance of classical and original modern pieces, a mini hands-on corner, and time for questions & answers.

Hiromitsu Agatsuma
Shamisen Player
Hiromitsu Agatsuma was born 1973 in Ibaraki, Japan. He began studying the Tsugaru Shamisen when he was just six years old and went on to win one competition after another, earning him high praise in the traditional Japanese music world. Agatsuma continues to explore both tradition and innovation through the Tsugaru Shamisen. His unique approach to the fusion of Japanese traditional instruments with Western music always receives high acclaim, and his collaborative work with global artists include Herbie Hancock, Marcus Miller, and many others.

Notes:
Workshop conducted in Japanese only.