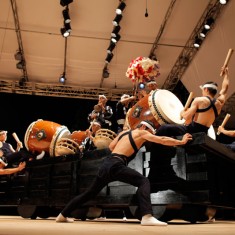 Kodo and Earth Celebration will be featured in the following television broadcasts. If you are in Japan, we hope you will tune in.

This programme will introduce the three days of Earth Celebration 2012.

“Eco no Saho: Ashita no Utsukushii Ikikata e” (The Manners of Ecology: Towards a Beautiful Way of Living Tomorrow)

This program shows discoveries about Japanese traditional culture through the eyes of foreigners living in Japan. Kodo and Earth Celebration will be introduced on this program. 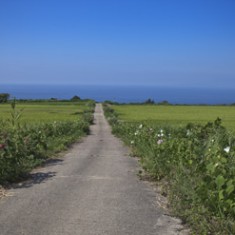 Numerous items were handed in to our “Lost & Found.” If you lost something at EC this year, please email the Earth Celebration Committee. Replies will be sent from Aug. 31 on.

Earth Celebration 2012 has come to a close. Thank you to all the people who joined us for the festival. In 2013, Earth Celebration will be held August 23 (Fri) through 25 (Sun). We hope you’ll join us again next summer on Sado Island.

If you would like to contact the Earth Celebration Committee, please do so by leaving a message on the answering machine, or send us a fax or email. Please note that you may not receive a reply until September. Thank you for your understanding. 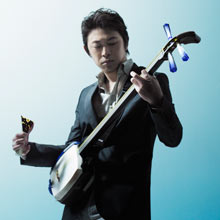 At this year’s Earth Celebration, we will welcome one of Japan’s leading shamisen players, Hiromitsu Agatsuma, to the Shiroyama Concert “Shukusai” on August 19th. Kodo performed with Agatsuma at a concert in May 2011 and we have felt connected ever since. We both play instruments used to “beat a rhythm,” both share Japanese traditions with the world, and we are performers from the same generation. In March this year, Agatsuma came to Sado for preliminary rehearsals for Earth Celebration 2012, and the echoes of our collaborations began to reverberate on Sado. We asked Hiromitsu Agatsuma and our own Tomohiro Mitome to share some of their feelings and experiences with our readers regarding the upcoming collaboration in August. (From Kodo eNews Vol. 31 July 2012)

I knew that it would not be easy for me to jump in and perform with the Kodo members, because they spend their daily lives together, travel together, and create together. I took part in rehearsals with them on Sado Island in March, and of course the music didn’t work perfectly right from the get go. But with time and practice, the taiko and shamisen, both deeply rooted in Japanese culture, began to resonate together naturally and echo in harmony. Of course there are fundamentals that overlap in Japanese instruments in terms of the groove and timing, but I think it was Sado that gave me that certain something… it was the first time in my life I’ve had that feeling. I’m personally really looking forward to spending many more hours on Sado Island with Kodo, and seeing what will come to life from that experience.

At Earth Celebration, I’ve also been given the opportunity to hold a lecture. I plan to talk about my activities to date, my feelings about the attraction and possibilities of the Tsugaru Shamisen and Japanese traditional music. I’ll also do a short performance during the lecture. I am looking forward to seeing you all this summer on Sado Island.

Our rehearsals with Hiromitsu Agatsuma in March were really rewarding. He joined in on the Kodo pieces that we decided to collaborate on, beginning by matching the tone. Then one after the other different melodies would come forth, like using different paints to make all kinds of new colors, strong ones and subtle ones alike. I greatly admire the work and time he put into this, allowing no compromise, to refine the collaborations on traditional pieces.

Shamisen and taiko were both originally instruments used for accompaniments, but over time they have come into the limelight on stage. Mr. Agatsuma has collaborated with people from various genres, and I’m looking forward to seeing what kind of music he will create with Kodo. The heart of our activities, exploring the possibilities of Japanese traditional music, is the same, even though we play different instruments. In the great outdoors on the Shiroyama stage, we want to share that energy with you all.

Hiromitsu Agatsuma was born 1973 in Ibaraki, Japan. He began studying the Tsugaru Shamisen when he was just six years old and went on to win one competition after another, earning him high praise in the traditional Japanese music world. Agatsuma continues to explore both tradition and innovation through the Tsugaru Shamisen. His unique approach to the fusion of Japanese traditional instruments with Western music always receives high acclaim, and his collaborative work with global artists include Herbie Hancock, Marcus Miller, and many others.

On the second day of EC, Hiromitsu Agatsuma will hold a lecture and demonstration. It’s a great opportunity to listen to him speak and perform up close. 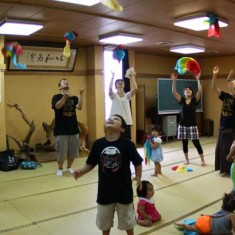 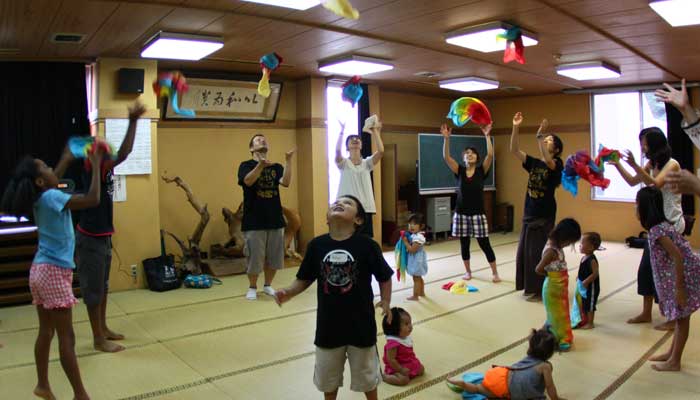 Music Together is a music and movement experience for children aged 0-6 and their parents or caregivers. It’s designed to develop musical ability in all children, young and young at heart! Come and join us for a musically rich activity aimed at the growing number of families at Earth Celebration who bring their kids along. It is our hope that by participating in this workshop you can add a hands-on fun and musical family activity to your experience at Earth Celebration!

For further details about this early childhood music and movement program, please visit the Music Together website. Music Together 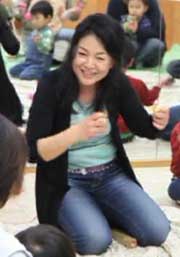 Yasuyo Minoura has a wealth of experience as a Music Together (MT) instructor from offering MT workshops for over eight years to children and their parents, mainly in Nagoya. She also pours her passion for making music into drum circles and has been a drum circle facilitator for four years now. This summer, she is looking forward to enjoying “Music Together” with everyone at Earth Celebration.

12 children per session, ages 8 months – 6 years. All children must attend with a participating guardian. 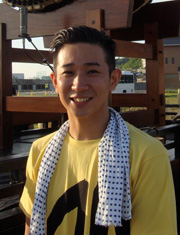 At Earth Celebration (EC) 2012 on August 17, the Shiroyama Concert “Opening Night” will kick off the festival with Shogo Yoshii making his debut as artistic director. We asked him about the kind of festival atmosphere he wants to create and share at EC this year.

END_OF_DOCUMENT_TOKEN_TO_BE_REPLACED

All seating in Shiroyama Park is general-admission, outdoor seating on the lawn. In order to make things smoother for everyone at the concert entrance, Entrance Order Colour Cards are distributed prior to each concert, and card-holders are admitted to the venue according to the colour on their card.

You must show your ticket or voucher for that day’s concert to receive a card.

*There are “Elementary/Junior High School Student Entrance Order Colour Cards” available for ages 6-14. No ticket is required, so please just ask for the number of cards you require. (Ages 5 & under do not require a ticket or colour card.)
*Only one Entrance Order Colour Card will be granted per ticket. One person may receive up to a total of five Colour Cards, whether for ticketed adults or free admission school children. (We may increase this number when the queue is short.)

Ferries to Sado Island may be cancelled due to high waves. Please check the weather and Sado Kisen Ferry updates before you set off on your travels.

Shiroyama Concerts will be held in the event of light rain. However, if the presenter deems the concert cannot be held safely outdoors, the concert will be canceled.
Shiroyama Park offers free seating directly on the park’s lawn. The lawn can get damp from dew or rain so we recommend bringing a ground cloth or plastic sheet to sit on. 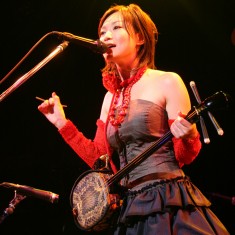 Anna Sato, a singer from Amami Oshima, will join Kodo for Kodo “Opening Night,” the Shiroyama Concert on Day 1 of EC 2012 on August 17 (Fri). Traveling from one island to another, the clear echo of Ms. Sato’s island vocals will ring out from Sado this summer. Don’t miss this special occasion!

I am honored to be able to take part in Earth Celebration for the first time, especially for this year’s milestone 25th anniversary. I hope that the music created together with both Kodo and the audience will speak to the hearts of everyone present. I expect that the shimauta (island songs) passed down to me from generations past in my home of Amami will deepen my bond with you all. With these hopes in my heart, I look forward to letting my songs echo out across the vast, unspoiled nature of Sado Island. END_OF_DOCUMENT_TOKEN_TO_BE_REPLACED 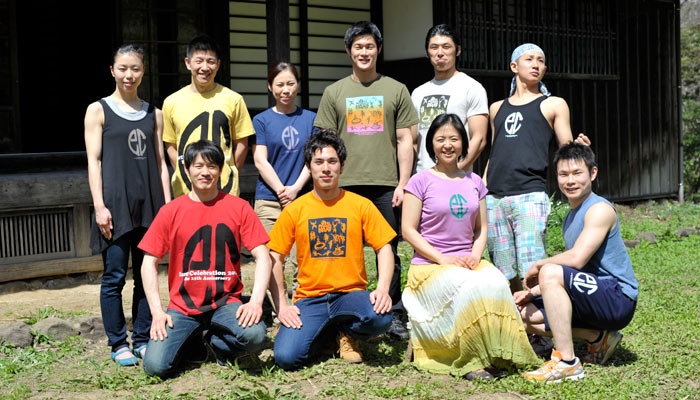 To commemorate EC’s 25th anniversary, we’ve prepared t-shirts featuring the very first EC logo by illustrator Seitaro Kuroda. There will also be a colorful array of t-shirts and bags on sale featuring illustrations by Hideaki Masago. Please note that there are a limited number of each design for sale, so we recommend buying your favorite items sooner rather than later.