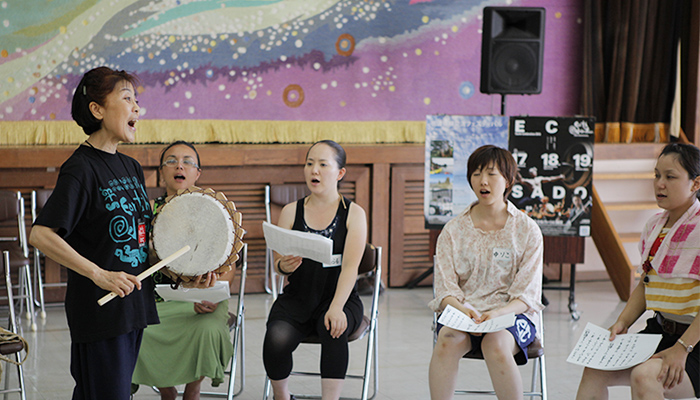 A workshop designed for parent-and-child participant teams, Yoko and Masami will sing forgotten Japanese nursery songs while playing taiko and other rhythmical instruments. This Mini workshop will give you and your kids a rare opportunity to experiences the wonders of voice and rhythm first hand.

Yoko Fujimoto joined Sado no Kuni Ondekoza in 1976. After three years of performing, she stepped down from the stage to edit the monthly Japanese language newsletter and teach the apprentices. In 1989 she began to sing again and has been Kodo’s principal vocalist ever since. Apart from Kodo Concerts, she performs in the female song-and-dance trio Hanayui, holds concerts and drum-and-song workshops with Yoshikazu Fujimoto, and is a member of the Triangle Project with Japanese-American musicians PJ Hirabayashi and Nobuko Miyamoto. She also conducts Voice Circle workshops, one of her self-proclaimed “life works.” In 2008, her first solo album “morisa komorisa” was released.

Masami Miyazaki was born on April 15, 1974 and grew up in Minamata, Kumamoto prefecture. She entered the Kodo Apprentice Centre in 1998 and became a Kodo member in 2001. On stage she mainly plays taiko and kokyu (Chinese fiddle), as well as dancing. Recently she has gradutated to a role of director of Kodo’s school tour concerts and conducted numerous taiko workshops. With her charming personality, Masami, also known as “Sammy sensei”, melts just about everyone’s heart. On stage she can both make you laugh with her comical stylings, and at the same time move you with her graceful kokyu performance.

Notes:
This event is conducted in Japanese only. No interpretations will be available.

Get Involved, Join a Live Event!

To take part in a Live Event, please see the page below.