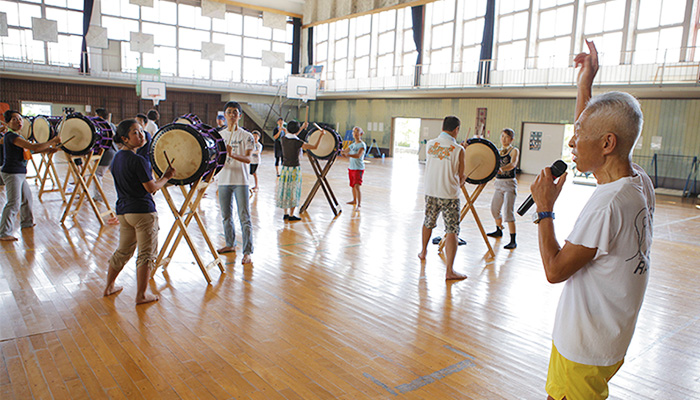 Hachijo Daiko embodies rhythms and a drumming style indigenous to Hachijo Island. It is performed by two people drumming simultaneously on both sides of one drum. One performer keeps the base rhythm while the other plays improvised solos. You’ll learn the basics of this world-renowned taiko style which duly captures the atmosphere of the island and the spirit of its people. There are various styles of playing Hachijo Daiko, and this workshop will focus on the “honbataki & shabataki” styles.

Hiroo Asanuma was born in 1947 on Hachijo Kojima, one of the outlying islands of Hachijo. Influenced by his father who was an expert in the Hachijo Daiko style of drumming, he was exposed to taiko from an early age. After years as an active member of a taiko group on the island, he decided to go solo to broaden his expression and truly make the taiko a central part of his life. His unique drumming style evokes a broad range of emotions from joy to nostalgia, and its unique sound has earned Mr. Asanuma fans around the world. He is a master of both of the traditional forms of Hachijo and is also well versed in contemporary drumming styles. Hachijo Daiko is popular all over Japan but relatively few people have had the opportunity to learn the original form directly from the source. Mr. Asanuma is dedicated to making sure people learn and understand it correctly. While remaining an inhabitant of Hachijo Island, he continues to teach and perform on the island, throughout Japan, and even abroad.

Participation Fee:
4,000 yen (Drumsticks will be lent to participants who do not bring their own.)

Notes:
Workshop conducted in Japanese only.
You may bring your own drumsticks.
Please dress in loose-fitting clothing suitable for exercise.