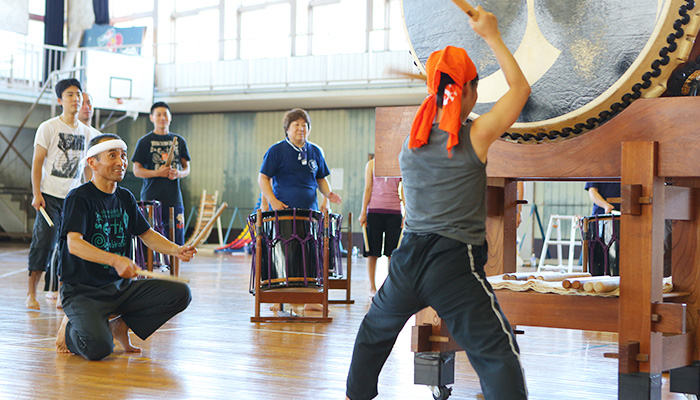 If you beat a drum, it makes a sound. But drumming a beat that moves the hearts of others is something else all together. Pour your soul into each strike! Play with complete devotion! Make strong, soft, feel-good sounds! Release vibrations filled with emotion! The list goes on… We will approach the instrument with the idea of “singing through the drum” in mind, and Yoshikazu will be there to guide you in a fun and friendly way.

Yoshikazu was born on Dec. 30, 1950 and grew up in Wachi (now Kyotanba). He joined Sado no Kuni Ondeko-za in 1972, and was a founding member of Kodo in 1981. Since then, he has been the group’s featured O-daiko player and center-man for the “Yatai-bayashi” climax ever since. Yoshikazu is presently Kodo’s most senior performing member. In recent years he has played a large role in educating the Kodo apprentices, and is conducting more and more workshops for the general public. No one in Kodo lives up to the name “Children of the Drum” like Yoshikazu; he simply loves the taiko.