Held for the first time in 1988, Earth Celebration (EC) is an annual summer festival presented by the taiko performing arts ensemble Kodo in tandem with the people of Sado Island. Through the years, EC has brought various artists from around the world to Sado and continues to send a message of “celebrating of the Earth” across the globe. 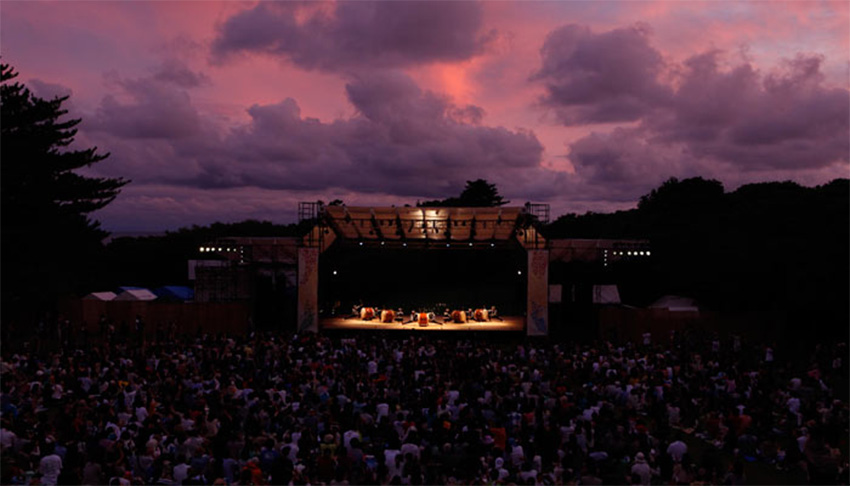 Since 1988, Kodo, a world renowned taiko ensemble and Japan’s most internationally acclaimed performing arts group, has held an annual music festival called “Earth Celebration” (EC), produced in cooperation with Sado City. For a quarter century, EC has been a venue for Kodo to invite artists they have met in their travels back to its home of Sado Island to engage in unprecedented musical collaborations. Under the theme “Tataku” (to beat a rhythm), the most primal human expression, and set against the rich natural splendor of Sado, EC seeks an alternative global culture through musical and cultural collaborations with artists from around the world. Now in its 27th year, EC is the nation’s longest running music festival, described by the New York Times as “Japan’s leading music event.” In 2009, in recognition of the organization’s “notable contribution to the promotion of Japanese traditional culture and to the revitalization of the local community,” the Earth Celebration Committee was awarded the Tiffany Foundation Award for the Preservation of Japanese Traditional Arts and Culture in Contemporary Society.

“Through world music and artistic exchange, using the natural beauty of Sado to set the stage, I would like this event to be an experiment in strengthening the communal ties of all of Earth’s inhabitants. Then, through our mutual understanding, we can establish a new Earth culture, bringing us one step closer to a world where human beings can truly live, as human beings. Under a star-filled summer night sky, with the beat of the drum being carried far away along with the ocean’s roar, the sound of gamelan and sacred Shinto music fill the air… that is the vision I wish to bring into reality.” 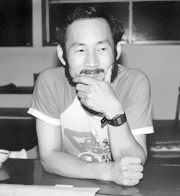 Tokyo-born Toshio Kawauchi moved to Sado in 1971 to help form Kodo’s antecedent “Sado no Kuni Ondekoza,” and lived communally with the group as one of its founding members. On stage, he mainly played the shamisen, but he also played a large off-stage role in administration. When Kodo was founded in 1981, he became the group’s first managing director. Toshio Kawauchi was Kodo’s spiritual pillar. He poured his heart into the Kodo Village concept and the planning of Earth Celebration. His aim was to encourage the preservation of regional cultures and promote global cultural exchange. Kawauchi was known to friends as “Hancho.”
ツイート